(Photo of Trasaccos yet to be constructed site plan which will demolish two eco resorts (Maranatha http://maranathabeachcampghana.com/ and Midas), two schools, multiple churches, community centers and many more buildings along with threatening the vulnerable sea turtle nesting area and displacing over 1000 residents in Kewunor community)

A fishing community nestled between the Volta River and the Gulf of Guinea first heard about the potential development of a luxury resort and boat marina on their land in the form of a vacate notice in October of 2013. The notice indicated that the community had 30 days to remove themselves, their homes, and their businesses from the estuary and recommended no place for them to resettle and offered no compensation. The community includes a beach camp, a school funded and built by the beach camp, several community churches, a community center, and a harbor for the fishermen’s boats. It also includes several shrines and 200 homes.

The vacate notice was retracted after the sod-cutting ceremony and relocation was promised, but plans never made known to most residents.

Youth leader, Winfred Dzinado, who created the eco-tourism destination to fund the construction of a school in the community began to search for answers but was offered no detail about where the community would go and how they would survive being displaced from the river and the sea where they make their meager income. Over the next few years, lawyers mysteriously dropped out of the case after the community paid for their help, and details around the development were next to nothing until August when I uncovered a newly formed international partnership between Trasacco and the Hilton Hotels franchise. The chief architect, surveyor, and development manager have been dishonest in communications about their plans and have already begun taking $100,000 deposits for condos that have yet to be built.

The community is planning to continue forward with their efforts by adding plaintiffs and continuing the fight for their land in court.

Legal Summary: The Land and People of Ada

This is a brief history of the village of Kewunor compiled from oral histories and interviews given by Nene Tetteyga, Ada Foah Chief and landlord; Torgbui Badzi, Acting Chief of Kewunor; Patrick Yetiekpor, son of Kewunor’s first settler; and Emmanuel Lab-Donatt, a young member of the Terkpebiawe clan. Much of this information is also supported by C.O.C. Amate in his book The Making of Ada and a letter written by Kewunor’s first settler, Emmanuel Yetiekpor.

The municipality now known as Ada or Dangme East District was settled by four Dangme-speaking clans who migrated from Lorlorvor near the Shai hills and were drawn to the area by the Songor Lagoon. The territory was divided among the four clans. The Adibiawe was the first clan to settle and they occupied the area from Agbanaka Valley to Kafa Valley. The Lomobiawe settled next in Sege and the Togbloku area. Next came the Terkpebiawe to occupy the area from Anyaman to Patukope in the south. Finally, the Dangmebiawe settled from Songutso-ekpa to the estuary where the Volta River meets the Gulf of Guinea.

After the Katamanso War in 1826 the Great Nene Tetteyga of the Lomobiawe clan founded the town of Ada Foah and purchased the land from its allodial owners, the Dangmebiawe clan. Since that time, the whole of Ada Foah land has been owned by the Tetteyga family, and it is the only privately owned property in Ada. At the time when the Great Tetteyga bought the peninsula, it was heavily forested, and the sea was threatening to overtake the land. Nevertheless, Tetteyga believed that the land was valuable, and his children and grandchildren have been enjoying the land for nearly 200 years. At that time, the geography of the area was different from present day; sea erosion and new land emerging from the riverside have altered the landscape. The Tetteyga family settled boundary disputes with the neighboring Futuenya people in 1911 and 1931. During the second dispute, when Ghana was known as Gold Coast, a surveyor was sent to construct a site plan and settle the dispute, and elders from both Futuenya and Ada Foah showed their agreement by adding their signatures to the document, which is still kept in the Tetteyga family’s records. 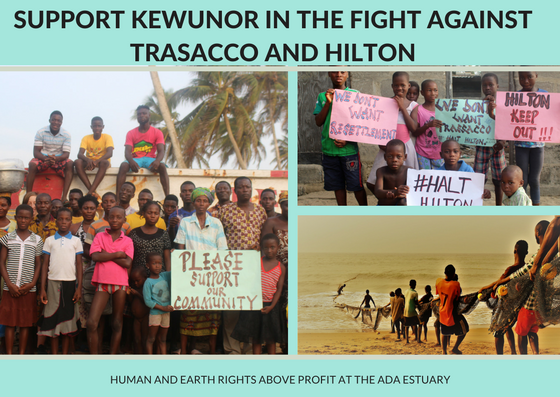 The easternmost stretch of the Ada Foah peninsula, now known as Kewunor, was settled by an Ewe fisherman named Emmanuel Yetiekpor. The shifting of land boundaries due to erosion from the ocean makes the exact date of the Kewunor settlement unclear. However, from 1909 Yetiekpor and his family had been living on a portion of the land that is now in the sea. At that time the mass of land separating the ocean from the Volta River was much wider than present day. The Ewe people walked from their place at the oceanside to the riverside where Kewunor now rests to fish in the river. Many other families came to join Yetiekpor. A man named Dafliso brought the net for ocean fishing, and the settlers learned to exploit their unique estuary environment, fishing in both the Volta River and the Gulf of Guinea.

In exchange for three (3) bottles of Akpeteshie, the land and coconut trees were given to Yetiekpor under the authority of the Ada Foah chief (a member of the Tetteyga family) and he became the first chief of Kewunor. It is said that the present day village settlement was established finally either in 1940 or 1949. For the past century, the descendants of these first settlers have lived peacefully and undisturbed on the peninsula, making their living from fishing in both water bodies, adapting to the unpredictable movements of the sea, and have known no other chief but Tetteyga and his descendants.

In 1974, under an Executive Instrument dated 26 April, the Ghana Tourist Board under Kofi Annan acquired 159.52 acres on the delta from Nene Tetteyga for use in tourism development. The land was surveyed, coconut trees counted, and full monetary compensation paid to the Tetteyga family. However, the project was abandoned and the government has made no use of the land they acquired. All the while, the people of Kewunor have resided there, cared for the land, and cultivated coconut plantations. In 1990, the Tourist Board under different leadership approached the Tetteyga family requesting additional land. The family refused to give them more land, citing the government’s failure to develop the land it took in the 1974 acquisition.

The people of Kewunor have since been undisturbed by any disputes over land ownership, encroaching development projects, and government acquisitions. It was not until Trasacco Estates Development Company Ltd. (TEDC) set their sights on the land for tourism development that the residents of the village came to know of the Dangmebiawe clan and the complex ownership history of the Ada Foah peninsula.

The following is a summary of correspondence, agreements, and events concerning the plan by TEDC to purchase the land of Kewunor for a tourism development project that would bring a high class tourist resort and marina to the area.

In 2009 the Dangmebiawe clan of Ada entered into discussions with TEDC to sell a parcel of 178 acres in Azizanya for the development of a high class tourist resort and marina. At least as early as March 8, 2010 the Dangmebiawe began corresponding with the Ghana Tourist Board, requesting the return of the piece of land acquired by the government under the Executive Instrument of 26 April, 1974, claiming the land was wrongfully acquired. In a letter from Atsu Gorleku & Co., the lawyers of the Dangmebiawe clan, to the Ministry of Tourism dated 3 August, 2010 they claimed that the government in 1974 wrongfully paid compensation to William D. Nanor (a member of the Tetteyga family and direct descendent of the great Tetteyga). This, they say, was a fraudulent acquisition, because the Tetteyga family did not own the land. According to current Ada Foah Chief and Kewunor landlord, Nene Tetteyga and other sources, however, the land was purchased by the Tetteyga family from the Dangmebiawe in the 1820s. Although a record of the sale no longer exists, the site plan constructed in 1931 to settle boundary disputes between Futuenya (Otrokpe) and Ada Foah reflects the Tetteyga family as the proper owners of the place.

After executives of Trasacco discovered that the parcel of land in question was vested in the name of the Ghana Tourist Board (GTB) in 2010, they began dealing with the GTB directly. This prompted several strongly worded letters from the Dangmebiawe clan like the one sent to the Ministry of Tourism. In January of 2011, Nene Osabutey Lamuer Okumo III (divisional chief and head of the Dangmebiawe clan) sent a letter to late President John Evans Atta Mills requesting the release of the Azizanya land to the Dangmebiawe; and in September of that year he sent a request to the Lands Commission to release the land to Trasacco, per a lease agreement the clan had reached with the company. It is unclear from the documentation we were able to obtain whether the Dangmebiawe clan’s allodial claim to the land was ever restored as they requested. It appears, however, as though all agreements concerning Trasacco’s interest in the land were channelled through the Ghana Tourist Board (later Ghana Tourism Authority).

On 22 August 2012 the Ghana Tourism Authority (GTA) sent a letter with an attached site plan to the Lands Commission requesting a lease on the Kewunor land to the GTA so they could sub-lease it to Trasacco. (It might be worth noting that this was a repeat of a request from 2010, and it is unknown why—or whether—the business was stalled for almost the whole of 2011 and 2012.) On 14 December 2012, the Lands Commission notified the GTA of their approval of the request and the GTA was granted a Government Mixed Use Lease on 72.94 acres of land in Azizanya for a period of 50 years. According to the letter the lease was to take effect 1 August 2012.

On 8 March 2013 Trasacco, by way of the GTA, made payments totalling GHC 226,885 to the Lands Commission to formalize the agreement. (Because the land is vested in the GTA for tourism development, Trasacco pays the GTA who in turn pays the Lands Commission.) Trasacco is also to pay a nominal rent fee annually of GHC 7,295. Seven months later, on 21 October Ian Morris, managing director of Trasacco Estate Development Ltd. sent a formal vacate notice to Kewunor Acting Chief Torgbui Badzi insisting that all structures be removed from the site within 30 days. On 20 November Trasacco held a sod-cutting ceremony on the premises of Midas Beach Camp, to which they invited Azizanya Assemblyman Tetteh Akli to appear as an honoured guest, but failed to notify the people of Kewunor and proprietors of Midas and Maranatha beach camps. The same day, Morris sent another letter to Torgbui Badzi apologizing and retracting the vacate notice. In the letter, Morris pledged to relocate the village to a ‘suitable’ plot of land. As of February 2018, Kewunor residents remain unsure of Trasacco’s plans and have not been notified of the site for the proposed relocation.

You're Invited to 'A Night in Ghana'